Norway eased its restrictions considerably in the beginning of May. And yet, they counted just 10 new infections between 21 and 27 May, and the dead toll has increased by zero. This article explains why that is, and how the Netherlands are making a huge mistake by keeping gyms, for example, closed.

On April 24th I wrote this blog. After studying the numbers per municipality before the lockdown, this was my conclusion:

A new report published by the Norwegian CDC came with a similar conclusion. The reproduction factor there was already around 1 when the lockdown started and was already decreasing. 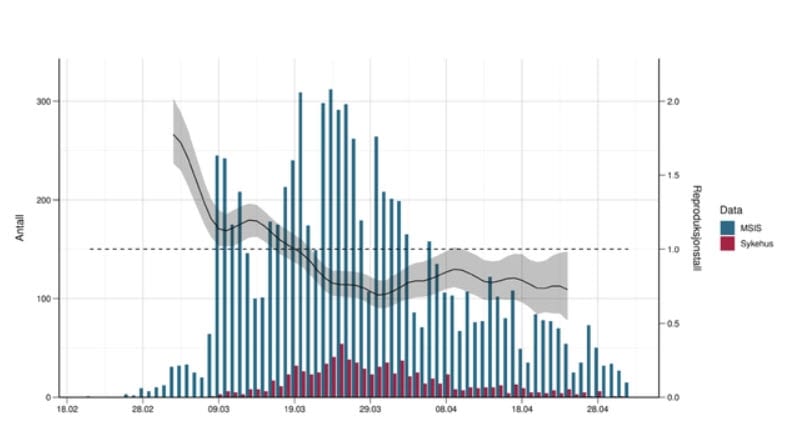 It is in line with my conclusion of last month: the reason that people think that the virus is very contagious, is because of those superspreading events. In one fell swoop large numbers of people are infected and you get the picture of exponential growth. For example, the event in Kessel on March 5th revealed that more than 60 people were infected in that municipality on 21 March. (Realize that the worldwide estimate is, that the number of real infections is at least a factor of 25 times higher than the number of positively tested. So the real number of infections could have been as many as 3,000 by then. That’s a quarter of the inhabitants of Kessel).

And then the reproduction factor is 2.  And that’s a high value, which creates the so-called exponential curve.

Yesterday, for the first time, I saw my conclusion from that time back in statements by a prominent virologist. In his daily podcast the German Prof. Christian Dorsten said the following:

“There are a lot of interesting new studies about the great importance of the superspreading events in distribution. Which happens mainly via aerosols. If you abort this transmission event, you actually have the whole epidemic under control”.

So these are the words of the principal adviser advisor of German Chancellor Angela Merkel. I wouldn’t be surprised if this is one of the reasons why people in Germany are considering abolishing the 1.5 meter distance at the end of June.

And this I read in the Washing Post on May 26th.

If you take all of the above into account and see the global patterns of dispersion, the conclusion is actually quite simple.

Where there have been no or only a few superspreading events, the growth of the number of infections has remained very limited and has now (almost) disappeared. Take a look here at the development of the number of deaths between mid-March and early April in a number of countries.

In the Netherlands, Belgium and France there have been many large and small superspreading events.  In Australia and New Zealand hardly.

The fact that Norway’s R0 was around 1 before the Lockdown was because they didn’t have any superspreading events there.

Virtually all over the world meetings with larger numbers of people were banned in the course of March. And almost immediately the R0 dropped to around 1.0. Except where people did not realize that superspreading took place in another way, such as in care institutions, meat processing plants, on naval ships and in buildings with malfunctioning ventilation systems in which many residents were infected.

The drop after the lockdown was therefore not due to the 1.5 meter distance. Because even before any measure was taken around mid-March, the R0 in Norway was already around 1.0. Just as in quite a few municipalities in the Netherlands.

But there is another very important point. Superspreading events actually only take place under certain circumstances. Above 30 degrees North latitude In confined spaces and with low humidity.  (In the other areas it is related to rain and thunderstorms, as I have described here).

And everywhere in the world where those conditions weren’t there, we don’t see any real outbreaks and the numbers are approaching zero. (Except of course at meat processing plants, where they artificially ensure that the temperature and humidity conditions within the building are optimal for keeping the virus airborne).

The good news is that we in the Netherlands (just like the rest of Europe) have had conditions that are unfavorable for aerosols and superspreading events for quite some time now. Even if they still happen by accident. And so you can see that with us, too, the numbers are heading towards zero. 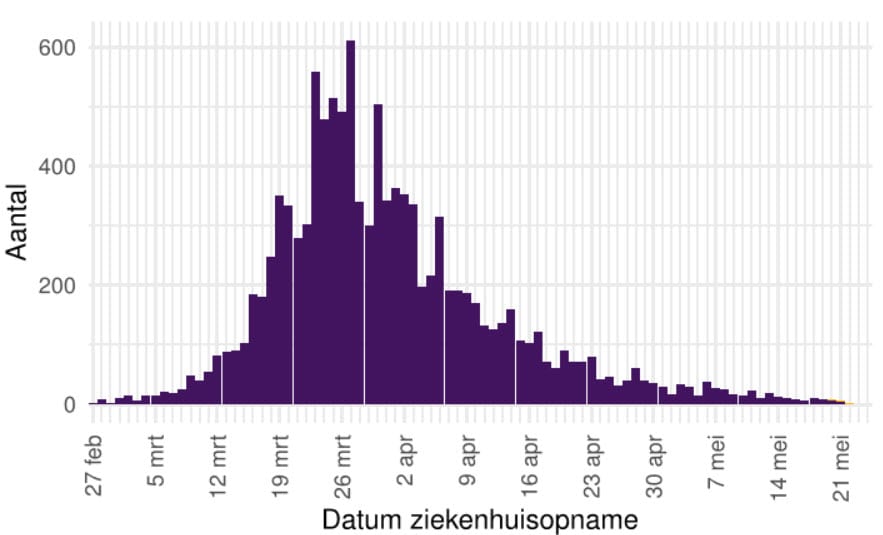 This graph runs until 26 May. Because it is a little hard to see, I will enlarge the last part below. On 23 and 24 May there were 0 hospitalizations. 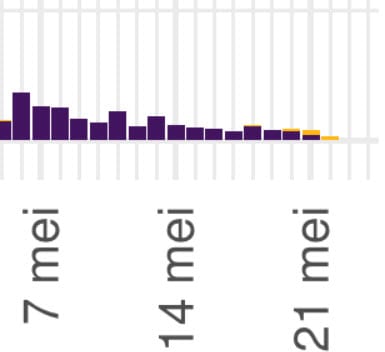 Recognize that there is a delay of two weeks in hospital admissions. So actually these figures indicate that already on May 10, almost nobody in the Netherlands was infected anymore (except in the meat industry).

Today May 28, so two weeks later, the number will be even lower and I think it’s almost zero now. (Realize that if, for example, there were 200 new infections in the whole of the Netherlands, it would still only be 1 in 85,000 inhabitants).

If you also know that in many parts of the country there have been no new hospitalizations for more than a week (so no new infections three weeks ago, according to the norm that every 200 infections leads to 1 hospitalization), then you might understand even better what a stupid decision it is of the government (on the advice of RIVM/OMT) to still wait until July 1st before, for example, gyms can be opened.

Because even if it would be the case that someone who plays intensive sports can infect another person, then of course there must be an infected person present to do so. And that chance is virtually zero in large parts of the country and very small in other parts.

It is a perfect illustration of how RIVM/OMT and the government are completely lost in their process of weighing up the risks of certain decisions. The great added value of sport for people’s health is subordinated to the very small chance that people can be infected at the moment. Certainly if the ventilation in the gyms is properly regulated, that chance is completely zero.

Based on the above, I make the following statement:

In the Netherlands there will be hardly any new infections until sometime in September/October. The number is already very low and will remain very low. Unless people don’t understand how infection hotspots like those in the meat processing industry have to be controlled.

This will also be the case in the rest of Europe.  In some countries this will be at the same time as in the Netherlands and in other countries a bit later.

The consequences of this still not being recognized by RIVM and OMT are enormous for the economy, society and public health.

But if you just soberly look at the worldwide figures from February until now, then this is the only logical conclusion.

If only we had an RIVM with the institution like the FHI in Norway! Since the beginning of May a lot more has been permitted there.

I read this on May 8th

And what do you think happened to the development of new infections in Norway? Between 21 and 27 May, there were only 10 new infections per day and the number of deaths increased by ZERO during that period.

Why don’t we learn anything from what we see happening abroad? When will this kind of information reach the people in the government, those who advise them and the Dutch media?