It seems likely that COVID-19 will show the same seasonal pattern as the flu. I provide a brief overview of the findings that have led me to this conclusion, including a meta-study of influenza outbreaks, a study that analyzed the COVID-19 outbreaks worldwide as a function of weather, and my own analyses.

Non (sub-)tropic regions usually experience flu epidemics in winter. This leaves us with an interesting question: Will the COVID-19 virus follow this seasonal course?

There are strong indicators that this will indeed be the case. However, in the meantime there have been more clues that strengthen this hypothesis.

Below you will find a short summary of these clues. I have attached links to the sources I used so you can read the supporting research for yourself.

What is the deciding factor in the seasonality effect of influenza?

The most important (and biggest) research report I could find is an article published in 2013 in The Public Library of Science.

The article covers a meta-study involving 78 different places, where for each it has been tracked for at least two years where an INFLUENZA epidemic started and what the weather was like at that time. From this data it has been concluded that the so called ‘specific humidity’ is a very good indicator for predicting the moment of outbreak in non (sub-)tropical regions.

Each dot represents a place where the following month a flu epidemic occurred. Out of the 78 testes, 44 places with an influenza outbreak were located above 25 degrees latitude (areas with heavy winters) i.e. when the specific humidity was at its lowest. More importantly, there seems to be an upper limit of around 6 g/kg. 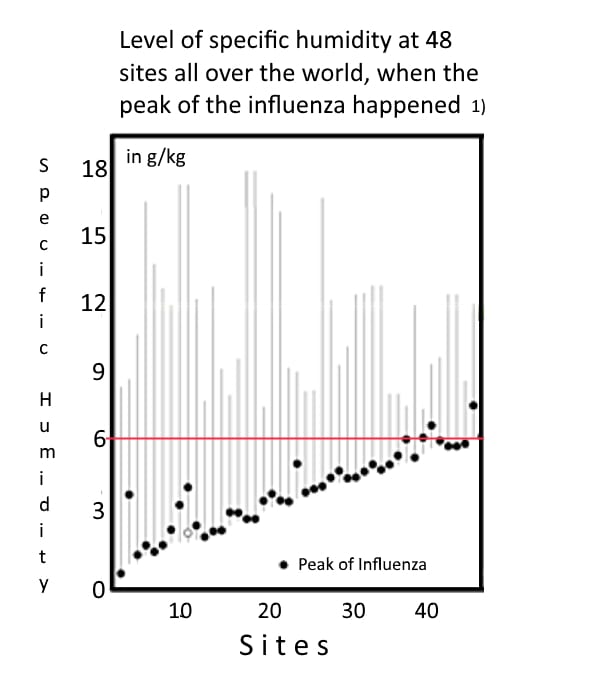 The literature gives two different possible explanations for the relation between humidity and the outbreak of flu epidemics, being:

So, the relation between the influenza-virus and the specific humidity has been proven. But can we say the same for the COVID-19 virus?

The good news is that the analyses of the virus’ global spread (as described both by me and by scientific literature) indicate a similar connection. Plus, the 6 g/kg limit of specific humidity seems to play an important role here too.

An important research paper published in early March looks at the COVID-19 outbreaks worldwide. It concludes that each outbreak occurred right after a period of temperatures between 4 and 11 degrees Celsius and a specific humidity below the limit of 6 g/kg. All major outbreaks worldwide are in the same “bandwidth” across the globe. 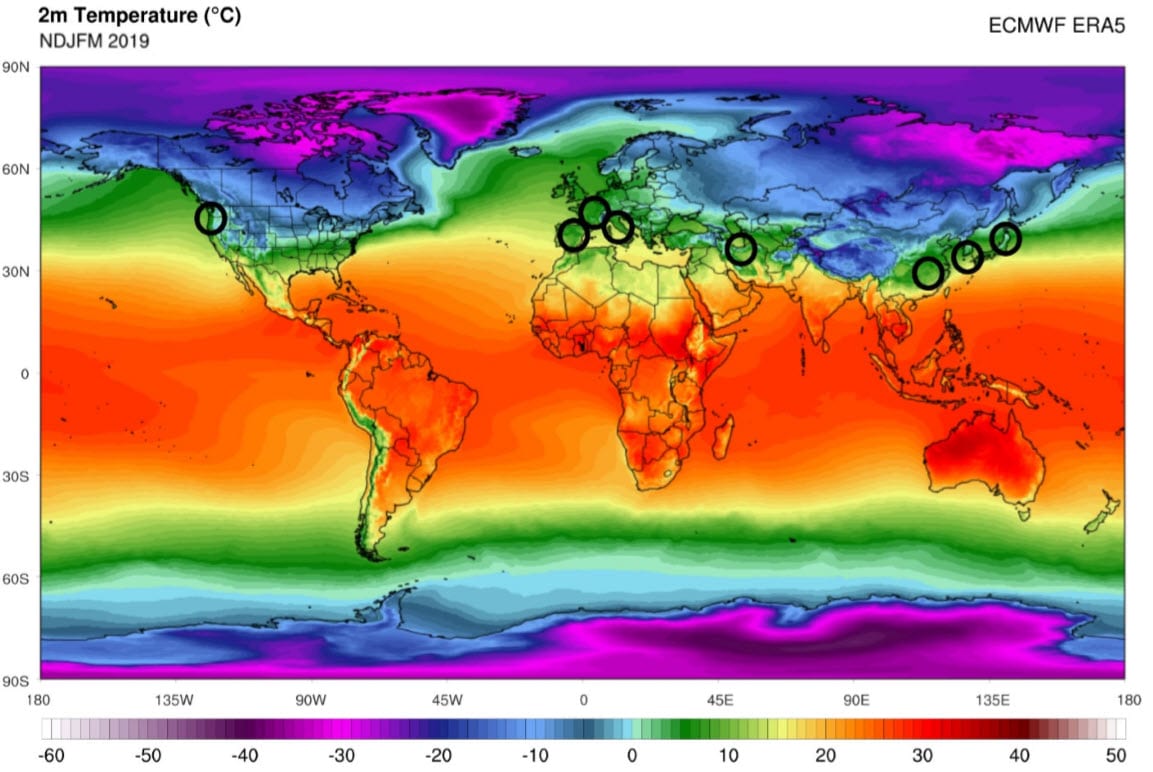 My own analyses of the global COVID-19 course show similar patterns, especially for Italy, the Netherlands and the USA. 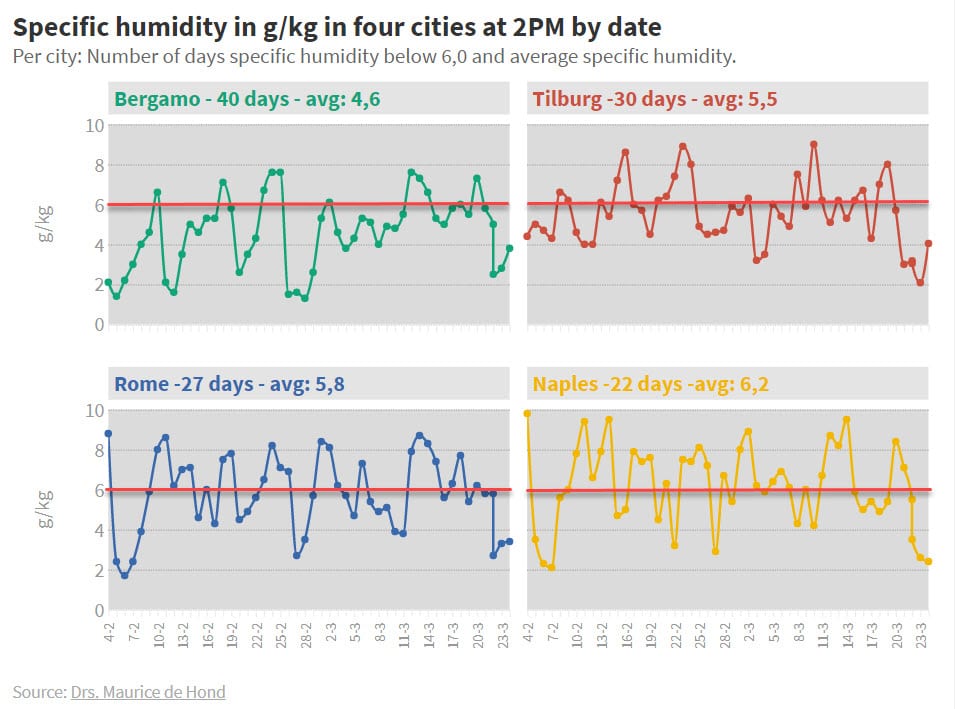 This graph shows the development of the death rate in the four regions, using the number of days after the tenth reported infection as criterion. 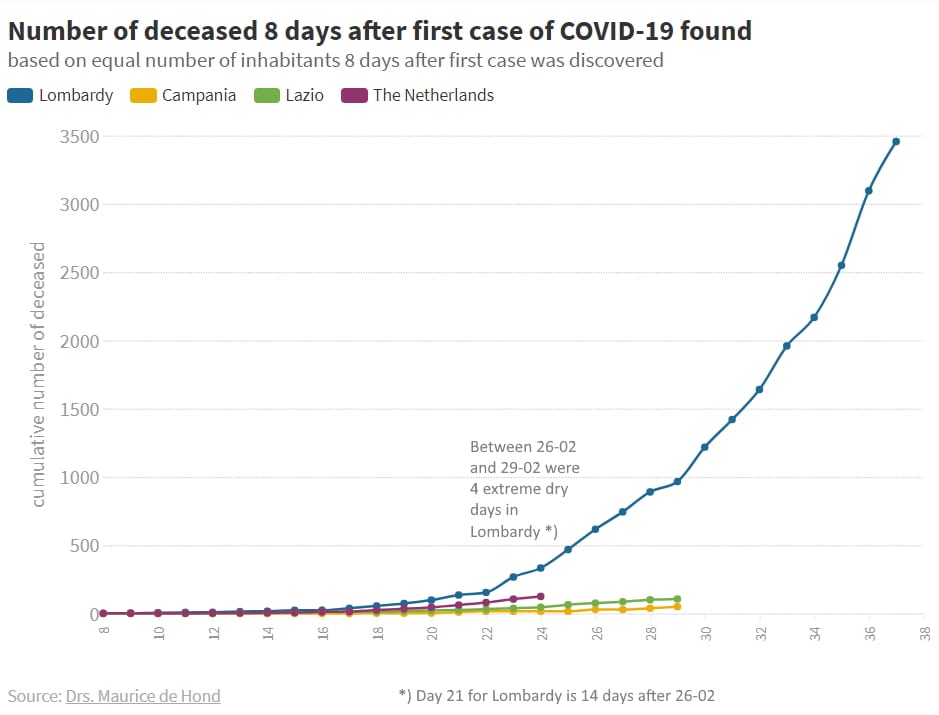 It’s clear that the death toll in the provinces of Rome and Naples are significantly lower than those from Bergamo and Milan. The Netherlands are somewhere between Lombardy (Bergamo), Naples and Rome. Italy locked down at the 9th of March, so we should start to see the effect of that right about now for Naples and Rome.

All these numbers support the findings of a clear relation between the intensity of the outbreak and the specific humidity and it is very likely that the previously mentioned 6 g/kg is an important threshold value.

The USA’s outbreak pattern is similar: when population size is accounted for, there are much less deaths in Florida and California than in New York and Washington State (Seattle). Here too we can see that with regards to the specific humidity there are similar trends to other investigated places. Seattle and New York both had way more days below 6 g/kg than Miami or Los Angeles.

There are two interesting states that give a remarkable (and valuable) number. Illinois (home to Chicago) has, so far, few deaths. This follows the hypotheses that when the temperature is really low (regularly below freezing) circumstances are unfavorable for spreading the virus.

In Louisiana, where the clear outbreak assigned to Mardi Gras (New Orleans’ carnival festival) on the 25th of February, the specific humidity was way above 6 g/kg (even more than 15 g/kg). So why the outbreak and death toll?

Something similar happened in Malaysia. In the last four days of February a big religious Islamic convention was held, involving around 16.000 participants, 1.500 of which were foreign. Malaysia also has a high specific humidity.

I will soon write a separate blog on how that is possible and why the Malaysia outbreak led to far less deaths than the Louisiana one.

Finally, there has been a Chinese research report, which also draws a line between the weather and the so called R0-value (how many people one individual infects) based on their findings in Chinese cities. As the temperature and/or humidity rises, the R0, according to this report, decreases.

All these results make a strong case for the hypothesis that specific humidity influences how fast the COVID-19 virus spread.

The fact that there are way fewer deaths in Rome and Naples than in Bergamo is mostly due to that very relation! Had the Dutch death toll followed a similar trend then we would have between 100 and 200 deaths instead of the now (estimated) 450.

This science can be of use in forming the policy with regards to lowering the R0 (speed of infection) and the exit-strategy (how we can slowly return to a normal situation). I will go into this in a following post.

These 6 blogs form a coherent whole:

How great is the danger of the COVID-19 virus really?
The influence of humidity on the spread of the COVID-19 virus (This blog)
What is happening in the (sub)tropical areas with the spread of COVID-19?
How do we respond to the positive effect of a higher specific humidity?
What if the diffusion rate of COVID-19 has dropped to -near-zero?
The enormous economic and social consequences of this pandemic