I regularly receive relevant information from people working for official institutions, which is not disclosed to the public. Information which those persons believe to be important to share.

Its content reinforces the view that these official institutions only publish information that confirms their traditional views and justifies their choices. Information that contradicts this, must be ignored or – even worse – kept under wraps. Whatever the cost, be it public health, economic or social.

A few days ago I received such a piece. When I read it my jaw dropped. It took some time to really comprehend what it all meant. Not only the content of it, but also (and maybe especially) that the Dutch CDC (RIVM) did not share this information en masse. 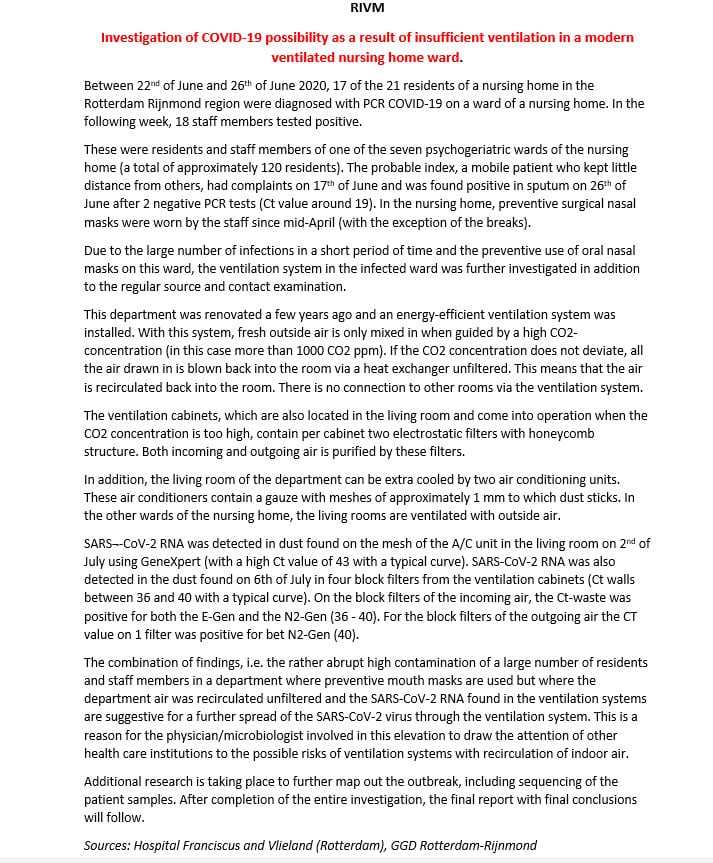 (Translated from Dutch in English)

This is the summary of the document  I received. It is an internal report to the Dutch CDC of a study commissioned by the local health organization of Rotterdam. You can read the translation of the whole document above.

In the living room of the ward there was also special ventilation equipment, plus 2 air conditioning units. This filter system was designed to remove dust from the air.

In the other wards this equipment was not available and the outside air was used directly for ventilation purposes.

Once again: the wording of the investigation is by an employee of the Dutch CDC himself, who wrote this report. They used the terminology ‘suggestive of’ and ‘possible risks’. I seriously wonder what other possible explanation you could have for these research results, other than that the virus was spread through the ventilation system, so that even the staff members were infected when they did not have their mouthpieces on.

I assess these results as a hard confirmation of the many pieces of evidence:

This also supports my thesis that since the beginning of April many people in care institutions have become ill (and died) due to the way the ventilation systems functioned. Little or no fresh air. And the spread of the virus over the entire department/through the entire building. Especially where many of the residents (and employees) have become infected, the chances are very high that it happened this way. In this way the viral doses are also extra high, so that a relatively large number of infected people die.

This is not only important information to evaluate what has happened in recent months, but even more importantly, it provides crucial information regarding the policy that now needs to be implemented to prevent new infections as much as possible from now on.