Covid-19 has the flu

Data shows that Covid-19 is following almost the same pattern as the flu waves. On top of that, a breakdown of the IFR of covid-19 per age group compared to influenza shows that they are quite similar. As long as the WHO does not recognize how the spread of COVID-19 really takes place, countries will take the wrong measures.

Covid-19 has the flu

It is becoming increasingly clear that Covid-19 has the same distribution patterns as influenza. We can learn a lot from this, if we are prepared to take a serious look at the data. Plus, we also know that it will lead to far fewer infections throughout Western Europe and North America in the coming months. (And it may reappear in the autumn).

The major eruptions of Covid-19 between January and mid-April have been in the areas where the flu waves are only in winter.  (Only above 30 degrees North latitude flu waves, only occur in the winter months. South of it we see different patterns. Then it is during rainy seasons). The big flu wave in 2017/2018 in the Netherlands lasted until week 20 (so beginning of May).

This is the overview of the flu in the Netherlands over the past 5 years.

Above 30 gr. NB in China, the annual flu wave is between December and March.   Wuhan is also located in that area.

When comparing the spread pattern of influenza and Covid-19 two points are of great importance to take into account:

By zooming in on the flu wave of 2017 -2018 and comparing it with the figures we now have for Covid-19, the above can be well illustrated.

In addition to the excess mortality numbers for the flu period 2017-2018, respondents were asked via Peil.nl at the beginning of May 2018, whether they had flu in the past 8 months. Based on the answers, we estimate that this percentage is 25% for people under 65 years of age and 15% for people over 65 years of age.

If we combine these figures with the excess mortality per age group in 2017-2018, you can estimate what the IFR has been during the flu wave that year. The IFR is the percentage of infected people who died from that disease. (Infection Fatality Rate).

We can also do that with the mortality of COVID-19 up to and including week 18 (these are the figures established by CBS). The accountability for the IFR, which we use, can be found here.

And then we see the following:

If we only look at the totals per age group, the similarities are very striking (the last two columns). The IFR per age group for influenza in 2018 and Covid-19 are quite similar. Only if we look at the gender breakdowns, we see that men die more of Covid-19 than women.

Apart from the difference in the way COVID-19 spreads compared to influenza, it is important to realize that in case of influenza in 2017-2018 100% of the cases were counted. Those who did not become ill were apparently immune to that year’s influenza variant(s). With respect to Covid-19 this is certainly not the case now. It is estimated that the percentage infected with Covid-19 until now is somewhere between 10 and 15%. So it is plausible that if Covid-19 could spread indefinitely, the total excess mortality will be a factor of 5 to 10 greater than the approximately 9,000, which have been established up to week 18.

Is Covid-19 going to follow the same pattern as the flu waves?

The central question now is whether Covid-19 will follow the same seasonal patterns as influenza in terms of spread. It seems so, because everywhere above 30 degrees North latitude where Covid-19 has broken out you see it descending sharply, like influenza does.

FT.com shows that nicely with the following graph. 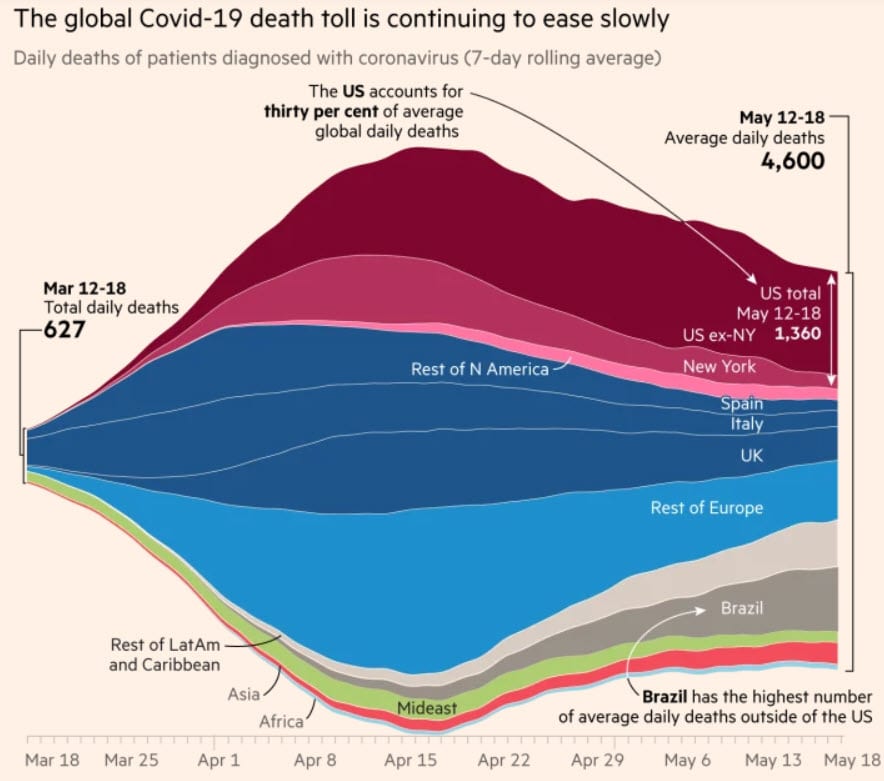 With these figures it should be taken into account that the death of Covid-19 occurs on average 3 weeks after the infection. So the current state of affairs on the graph shows the number of infections around 25 April (end of week 17).

The sharp decline in the number of deaths in Western Europe and New York since April 15th, which we actually see in this overview, is assumed to be due to the lockdowns that have been applied everywhere in various variants. (Personally, I think I can prove that the most important reason was that meetings with more than a few people were banned everywhere around 15 March, but that is irrelevant in the context of this article).

Influenza no longer spreads in Western Europe after week 18 to 20. Apparently the conditions for the influenza virus are not favorable then. Does that apply to COVID-19 as well?

There are many indications that COVID-19 follows the pattern of influenza in its spread.

I want to show that indirectly through the information about Brazil. This report gives an overview of the Brazilian flu waves. The country is very large. It runs from 5 degrees north latitude to 33 degrees south latitude. This graph from the report shows when the flu waves occur in the different states of the country.

The upper orange line concerns the Amazon province, where Manaus is located. The flu season starts there in week 17. And the flu waves come a bit later in the southern states. Rio de Janeiro is between week 22 and 24 on average. Sao Paulo (in grey) is around week 21.

Because Covid-19 didn’t “meet” any people in the beginning, who were already immune, it’s logical that it spreaded more easily. That happened in Sao Paulo around week 8. Especially rich Brazilians who had been on winter sports in Europe brought the virus into that area.

The outbreak in Manaus started around March 20.  I wrote about it in this blog.

The current developments in Brazil are pretty much in line with the influenza pattern (if you take into account that it can spread more easily than any influenza virus, because nobody is immune to it).

Below I’ve made a graph with the normal flu seasons in 4 countries in the southern hemisphere plus Italy and England. It shows the number of deaths by Covid-19 per 1 million inhabitants. The difference is obvious.

Flu in the winter

If we look at the top 10 countries in the world with the largest number of deaths by Covid-19 per 1 million inhabitants, those are all countries, like the Netherlands, where the flu wave is in the winter (as can also be seen in the graph in the two lowest countries). The official number of COVID deaths per 1 million inhabitants is (well) above 200 in those 10 countries (in that overview I have excluded very small countries).

The fact that the figures in New Zealand, Australia, Argentina and South-Africa are so much lower than ours, must be related to the fact that in those countries there was no flu season (yet). Therefore the conditions for the COVID virus to spread were significantly worse there than in our country, just like with influenza. Here I explain why.

My conclusion is that in the coming months Covid-19 will follow the patterns of flu worldwide.

(With the note, of course, that because few people in those countries are still immune, this will lead to a higher spread rate if the right measures are not taken.)

The major consequences of this dispersal pattern

Circumstances to spread again quickly will be (very) unfavorable for COVID-19 until sometime in the autumn. Regardless of what measures we take, the number of people infected will no longer increase significantly. Even if we do almost everything this summer that we were allowed to do before March 1st, it will certainly not see the large numbers of victims that we had at the end of March in the Netherlands.

If in countries below 30 degrees North the COVID-19 virus has not yet completely disappeared, there is a very good chance that when the normal flu season starts there will be major outbreaks.

With regard to the latter, I am very worried because WHO/RIVM are on the wrong assumptions with regard to the way in which one person can infect the other. (Namely through direct contact, completely ignoring the airborne infections through aerosols). This document by the RIVM of May 18th is sad proof of this. I can’t believe my eyes, how they are working towards their desired mantra/final conclusion.

If you don’t have to believe me, read this paper by the Australian professor Lidia Morawska. The title is “Airborne transmission of SARS-CoV-2: The world should face reality.” This is her conclusion.

Remember that in India for example, the monsoon period starts at the beginning of June. It starts in the Southwest (Kerala), where it can stay up to 5 months and then moves to the Northeast. In New Delhi it starts in July-August.

As long as the WHO does not recognize how the spread of COVID-19 really takes place, countries will take the wrong measures.

In the Netherlands through the 1.5 meter measures, with disastrous consequences for economy and society. (and also unnecessary health risks in indoor areas)

In countries where the rain season has yet to start, with vastly more COVID-19 victims than needed.

Hopefully WHO and RIVM will return from that road, leading to a disaster much bigger than necessary.

You have just read: Covid-19 has the flu.