The face masks are coming. This is my proposal to take measures in an intelligent way. An approach based on rewarding the positive rather than punishing the negative, facilitating the appeal to people's responsibility for others, and making it easier to hold each other to account. An approach that fits a mature society in the 21st century.

Those face masks are going to come.

Three and a half months ago, on March 31st, I wrote this blog in which I advocated to immediately start wearing mouth protection outdoors. Especially to make sure you wouldn’t infect others.

But just like Prof. Van Dissel thought that mouth guards were not necessary at care institutions (a view that was razed to the ground during the three-part series of Nieuwsuur), he was also firmly opposed to oral protection outside care. Several times during the information sessions with the Parliament he said that it would have a negative effect: “gives false security”.  A view that was subsequently repeated by our policymakers and administrators (another of their mantra’s).

The blind panic that has broken out in the media since last Tuesday, because we found almost 1.5% infection among the 12,000 Dutch people tested in a single day (the week before that was around 1.0%), has now also been passed on to politics. Partly due to new research into aerosols from Twente University and the measures taken in countries around us, face masks are suddenly high on the agenda.

You can also predict what will happen. It won’t be so long before we also have a face mask obligation here. You can also predict what Prof. Van Dissel c.s. will say: “The 1.5 meter is enough to protect you, but if people are less and less adhering to it, we will have to force them to wear mouth masks”. “Grab them by the ropes” as Prof. Marion Koopmans said yesterday.

At least do it intelligently!

In principle, wearing face masks in places and moments where there is a real risk of being infected or infecting others, is a good approach. But the crucial terms in this sense are “places” and “moments”.

When I followed yesterday’s news, I could feel what was coming.  Before I explain that feeling and come up with a proposal for a good approach, I would like to recall the wisest words I heard yesterday. They were from Professor Gommers:

“Distinguish between inside and outside. People feel that those two are different. If you explain that correctly, people stick to it.

I noticed that measures are being taken which will be both a complete overkill with a major adverse impact on all facets of the economy and society, and ineffective to keep infections very low in the autumn.

Unfortunately, the policy is driven by two components that in themselves are the cause of failure in the long run. Namely “the enforceability” and “the personal views of Van Dissel and the OMT”.

I will explain both briefly:

It has often been stated by administrators that the rules that are in place must be very simple, so that they can easily be enforced by security guards (police and BOA’s). Plus that they can be more easily remembered by the population. This top-down approach ignores the fact that we are now living in 2020 and not 1920.

I have been a football referee for a long time. Last season I lead matches between first teams in the 4th division of the KNVB. I have always tried to take players seriously and treat them with respect. I had all the power at my disposal to let the players do what I thought they should do. But if you radiate that you take someone seriously and treat them with respect, you get the same treatment back and you hardly need to use those powers.

By taking the population seriously and coming up with logical measures that don’t primarily assume “punishment” if you don’t do what you’re supposed to do, but above all respond to someone’s sense of responsibility, then things will be better and easier.  That is also the essence of Prof. Gommers’ message.

The scientific basis of much of what WHO/RIVM/OMT says is quite shaky. This does not only apply to the views of Van Dissel c.s. on face masks. But also with regard to other matters. I have written about it many times. For example, the importance of contamination by large drops is heavily overestimated. And the importance of contamination by aerosols in confined spaces is heavily underestimated.

Nor do they learn from experiences abroad. Namely, that wearing mouth protection in public transport including aircrafts, even if one does not keep 1.5 meters, has not led to an increase in the number of infections at those locations. In addition, the government does not want to carry out real-life tests either, so that we learn lessons about what does and what does not lead to more infections. (For example, by organizing controlled outdoor and indoor events for young people under tight conditions and supervision, despite initiatives from that sector).

In addition, it is of course too crazy for words that while there were/are large differences in the number of people infected per region, we have taken the same measures everywhere. In Groningen, the situation has constantly been much more favorable than in North Brabant. Nevertheless, the measures taken there were almost identical to those in Noord-Brabant.

We must learn lessons from all this.

Not by taking generic measures again, which are stacked up on the measures that already exist (but are poorly followed up), but by an intelligent approach.

An approach that keeps the chance of contaminations low, keeps society (economicly and social) afloat as much as possible and is supported by the vast majority of the population. Not out of fear, but out of the conviction that this is the best way to help other people and themselves in the Netherlands. Plus that it has components that work with rewards, rather than punishment.

Towards a differentiated approach

This is where I have already described the approach you can take as an individual. Below is my advice to the Dutch administrators to deal with this crisis in an intelligent way (and in doing so, to no longer blindly rely on RIVM and OMT):

My proposal is to divide the country into the 26 safety regions (or a division into even more regions). We would then have three qualifications: Green, Orange and Red.  Via NL-Alert you will receive a notification whether the qualification in your region has been adjusted.

The color coding does not concern the number of infected persons in that region, because that is related to the number of tests that are carried out, but the number of hospital admissions of people who have contracted corona.

For each of these three qualifications, there is a package of measures that you will see further on.

This will be possible for a large part of those indoor spaces in the coming months, and for another part it will take more time (but they have an incentive to do so). There will be financial support from the government for those spaces where considerable amounts of money have to be invested to get the situation in order.

We can combine the above into an overview, in which we deal with mouth protection in an intelligent way.

Mouth caps, but back to 1 meter

However, there is one more very important point to address before I give you that overview. I was in Italy last week, near Pisa. There, mouth caps have to be worn in confined spaces (such as shops, public transport and restaurants). Outside and on the beach (fortunately) not, although there are people who do that voluntarily.

In Italy they keep a distance of 1 meter and not 1.5 meters! 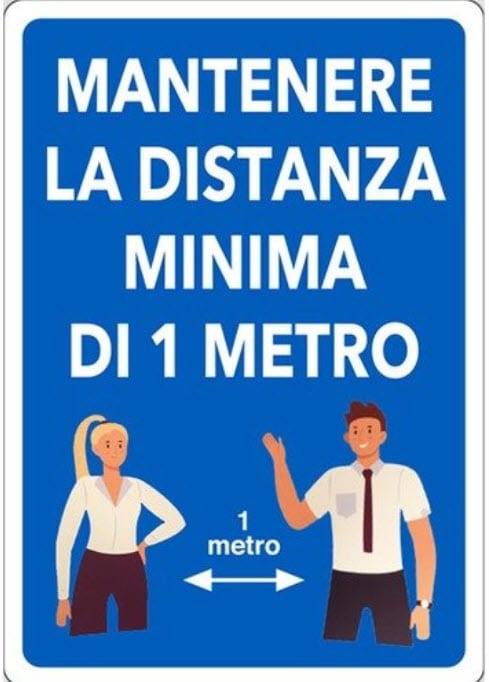 If you look at the number of daily tests in Italy, we see that they even test a bit more per million inhabitants per day there than in the Netherlands (around 700 in Italy and in the Netherlands until last week it was around 600).

On average, Italy has scored around 0.5% for weeks in the tests. Those were also the figures for the Netherlands, and we were very satisfied with them. The number of deaths per day fluctuates in Italy (if you would move it to the Dutch proportions) 2.

The conclusion is easy to draw: if the Netherlands would switch to wearing mouth protection in indoor areas, then we can also switch to the 1 meter distance in Italy, instead of the 1.5 meter.

A lot of warnings and stickers will have to be reapplied, but it also literally and figuratively gives the Dutch and the economy more air!

The intelligent approach for a country in the 21st century

If we combine the above, we get the following distribution with regard to the measures, the regions and the qualifications.

This is an approach that is easy to explain and that also gives people an incentive to stick to measures. If the region is green or remains green, this will bring benefits because there are fewer restrictions. Those who do not adhere to the measures can make the situation worse for the whole region.

This approach also provides an incentive for operators of indoor areas to ensure that their venue is corona free. In yellow or green areas it has a clear advantage to exploit an venue that is corona proof.

It also provides the population with tools.

In addition, I recommend carrying out various tests to see what works or doesn’t work well.  Further research could lead to reconsideration of the strict rules about keeping a distance. What I learn from the literature is that the risk of being infected by not being at a distance is only the case if you talk to each other face-to-face (or cough/sneeze). Not only by droplets (which can actually only hit you within 50 centimeters), but also by aerosols at a longer distance. But that only becomes problematic if the conversation takes a while.

The more we know about this, the more specific measures we can then take, so that this table can be adjusted on the basis of those experiences.

This is my proposal to take measures in an intelligent way that will also help us through the winter. An approach that is mainly based on rewarding the positive, and not punishing the negative. Through which you can also appeal to people with regard to their responsibility for others. And making it easier for people to hold each other to account.

An approach that fits a mature society in 2020.

Covid was in 2020 NIET doodsoorzaak nummer 1