William Wells provided the basis for the approach to social distancing back in the thirties. He also explains very explicitly that aerosols are a major danger in almost all diseases that have been studied. Yet the WHO, and therefore all CDCs in the world, don’t adhere to what Wells has been experimenting with since 1955.

Wiliiam Firth Wells, with his research from the thirties, would have provided the basis for the approach to social distancing, to keep the distance of more than 3 feet. 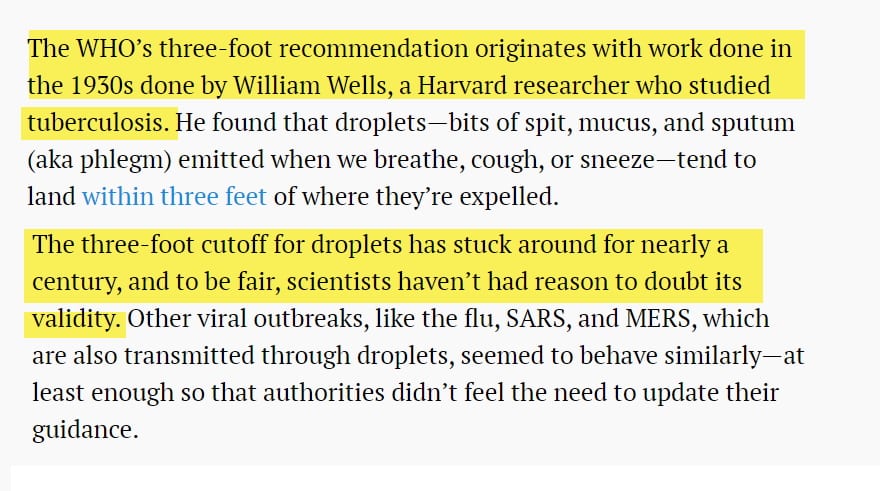 I was curious and tried to find his 1955 masterpiece. “Airborne contagion and Air Hygiene” with a description of all his scientific work

It took a lot of effort to find that 1955 book, but now I have it and it’s more than worth it. 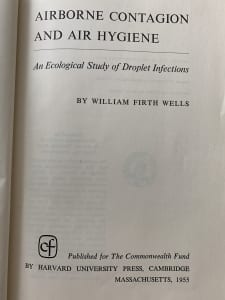 It’s about the work Wells has done since 1930 on the contagiousness of all kinds of diseases, with reports of many experiments. It’s a kind of handbook, and rightly so. It’s amazing what that man has done in those 25 years. If he’d still been alive, the world would have been a much better place and hundreds of thousands less people would have died.

When I looked in Wells’ book for that “empirical rule of thumb” of keeping your distance, I was astonished. It was just research into how far larger droplets spread when they come out of a person’s mouth or nose. And yes, most of them end up on the ground within 3 feet. But in no way was it determined whether someone was infected when they got those drops from a short distance.

It was something like measuring how far the best golfer can hit the ball. That’s over 400 meters. But that doesn’t mean the ball will end up in the hole. You have to determine that separately. And Wells didn’t do that.

But that wasn’t the reason for my astonishment.  From the title of the book it is clear what the subject of this 400-page collection is “Airborne contagion and Air Hygiene”. This is also explicitly stated in the subject description (page 319):

And the whole book is about that. With regard to a whole series of diseases, which pass through infections. Especially through bacteria/parasites, but also through viruses. A large number of experiments are reported on. How the infection then goes and what measures can be taken in the indoor climate to prevent it.  Really impressive.

The difference was a factor of 16 times. 32 of the 33 animals that inhaled the aerosols got a lung infection. None of the animals that were offered the large drops showed a form of swallowed infection after 6 weeks.

In short: larger drops do not cause an infection with tuberculosis, but it happens entirely through airborne microdroplets, which are inhaled by the animal (man) for a while and then “nestle” in the lungs.

But yes, one will object, tuberculosis is a bacterium.

But then on page 119 we see the following about experiments with mice: “Influenza virus inhaled in large and small drops DUPLICATED the effect observed in experiments with tuberculosis”. Mice that inhaled the aerosols died quickly. While the mice that had come into contact with the large droplets were much better off.

It then goes on to say that the influenza virus inhaled in microdroplets was much more contagious than if those drops had been removed from the air and inserted into the nose.

The rest of the chapter describes other tests with other infectious diseases, such as group C Streptococci. And the results are always the same.

It is astonishing that the much vaunted handbook of 1955 already explains very explicitly that the aerosols are a major danger in almost all diseases that have been studied. They go directly to the lungs and do their destructive work.

The large drops (cannonballs or not), if they hit you at all, enter the upper respiratory tract and are very difficult to reach the lungs.

But WHO, and therefore all CDC’s in the world, don’t adhere to what Wells has been experimenting with since 1955. The danger does not come from the larger drops. We have to protect ourselves from breathing in the aerosols too long. And we can abolish social distancing, keep 2 meters, 1.5 meters or 1 meter worldwide.

Fresh air and higher humidity are the protection against the aerosols staying in enclosed spaces for a long time. Outside, the aerosols don’t get stuck around you and you are completely safe.

Do you understand why there were such large outbreaks in slaughterhouses all over the world (little ventilation and low temperatures, the ideal circumstance for the virus to float)? But do you now also understand why WHO and the CDC’s don’t mention it as such, because if they acknowledged it, their whole position about social distancing would be undermined.

And what happened in Beijing lately also confirms that pattern. (In a wholesale center near the meat and fish department, where it is also much cooler than elsewhere).

As long as WHO and CDCs do not maximise their efforts to prevent the floating viruses, but do want to keep the one and a half meter of society afloat, hundreds of thousands of people worldwide will die needlessly (if not more) and the economy and society will be held in a stranglehold of having to keep their distance.

I hope that politicians and media and citizens now realise that RIVM, OMT and the usual suspects in the media, are wrong and have led to the wrong policy with enormous social consequences. On the basis of this information from Wells and what we now know about superspread events, it is easy to implement a simple policy in which the risks of infection can also be kept well under control in the autumn and the economic and social consequences can be greatly reduced.