This is how the spread of COVID-19 generally takes place

This is how the spread of COVID-19 generally takes place I studied to become a social geographer. My specialty was research & statistics. In 1965 I learned how to program and have since always used computers intensively for my work. In huge crises like the one caused by the COVID-19 outbreak it is of major …

Lees volledig artikel: This is how the spread of COVID-19 generally takes place

This is how the spread of COVID-19 generally takes place

I studied to become a social geographer. My specialty was research & statistics. In 1965 I learned how to program and have since always used computers intensively for my work.

In huge crises like the one caused by the COVID-19 outbreak it is of major importance to use a multidisciplinary approach. That explains my effort and approach.

For the past two months I’ve been studying the geographical patterns of outbreak the virus on a global scale. In doing so I used both old and very recent scientific studies to find answers to the following questions.

Coincidence is certainly not the answer to these questions (although it plays a very small part) and neither is the fact that certain places register better or fairer. And it being a matter of time before the situation is the same worldwide is also false. There are clear explanations for the above. Understanding their consequences heavily influences which exit-strategy we choose/must follow (worldwide).

Very soon it became clear (I read it on Twitter already in January) that the R0, the reproduction factor of COVID-19, was very high. In February it showed to be around 2,25. (1,3 for regular flu). This means that when no measures are taken, 1 person could infect on average 400 others in a one-month time span.

Everywhere authorities tried to bring that R0 to below 1 as soon as possible, and they were right to do so. If they hadn’t, the number of new cases would only increase faster.

Three things stand out when we look at outbreaks that occurred up until one month ago:

There is an explanation for all the above. Supported by studies on influenza, including experiments with animals, and research about COVID-19.

This explanation is, that the spread of this virus takes places mostly through the air in (semi) closed off spaces. More so than any other way.

Forms of infection that the media so frequently mentions, could cause an R0 of 1,1 or 1,2. Measures like social distancing and/or wearing masks are aimed at getting that rate below 1,0.

Science also tells us that when people speak, couch or sneeze they emit microdroplets (aerosols) which stay airborne for a long time, thus meeting almost all people in that space. It only takes one single individual to be infected (that doesn’t know he/she is) and you’re done.

(Unfortunately, the WHO and RIVM thought up until recently that this form of spreading didn’t happen that much.)

Scientific experiments have shown that

The effect of these aerosols is much less in well ventilated spaces.

The aerosols stay afloat for a long time in air with low humidity. They float the least at a humidity of around 6 g/kg (at 20 degrees that is a relative humidity of 45%.

Above this level of 45% the risk of getting infected increases again. However, above 80% humidity and/or 30 degrees there is no infection through air at all. (see graph below) 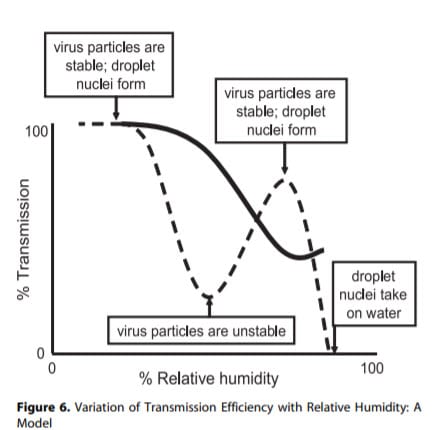 When we apply this information to the previously asked questions, we can answer them all.

Big outbreaks have (mainly) occurred in poorly ventilated spaces with a relative low humidity where many people gathered enthusiastically. After these so called superspread-events the spread has continued at smaller gatherings in the first two weeks of March (like church meetings, choir repetitions and parties like weddings and festivities).

The maps of the Netherlands and Germany below clearly show the relation between COVID-19’s outbreak and the distribution of Catholics in the country. The first superspread-event was carnaval. Then the infected that attended the Catholic church infected the rest of the Catholic people. 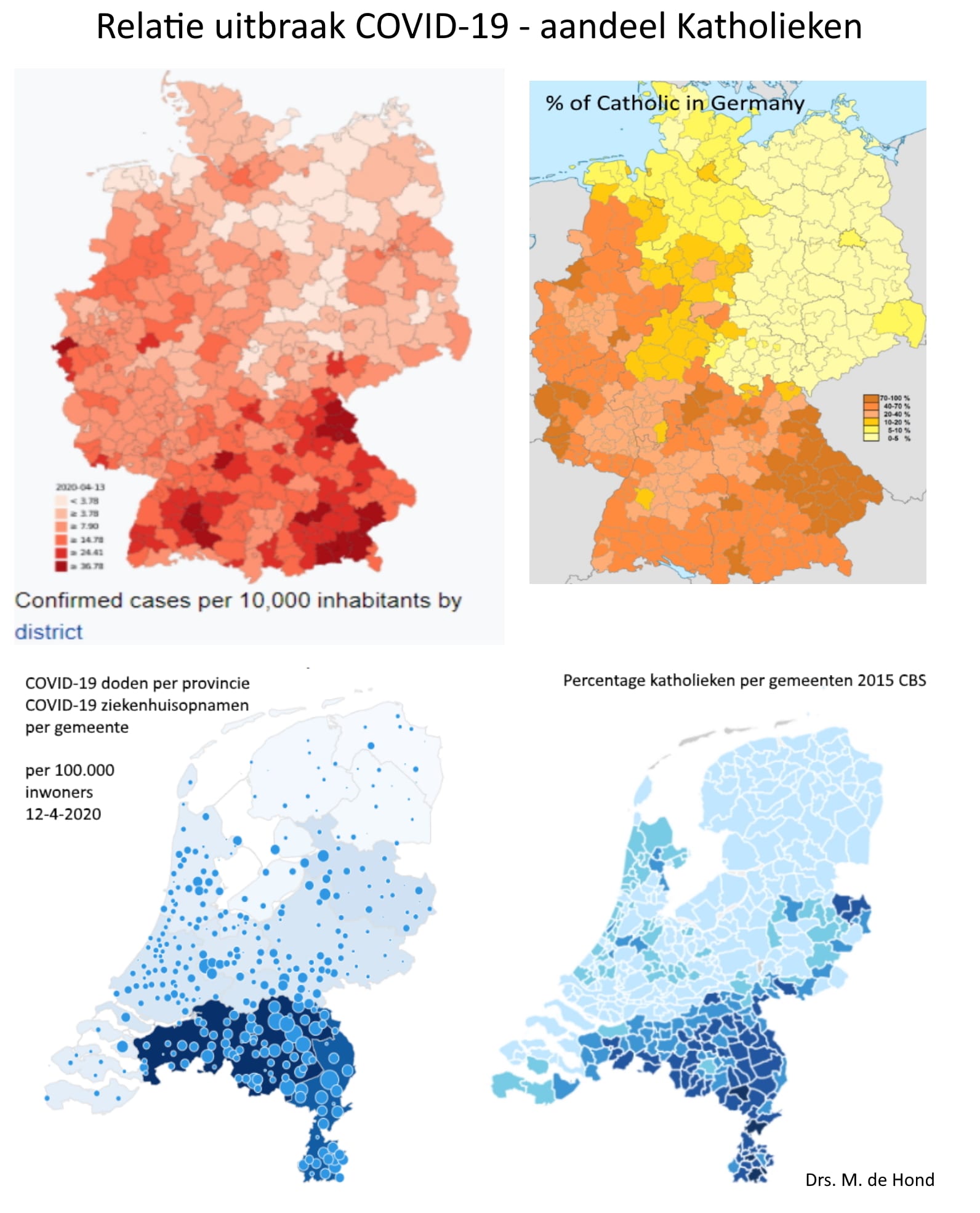 After that, thanks to “Day of Prayer of the Crops” on the 11th of March, in the Netherlands the entire Bible Belt got infected.

When looking at how the number of people ill or dead in the Netherlands develops approximately three weeks after the intelligent lockdown, we can first see stabilization and then a clear drop. Especially in Brabant and Limburg. (Some other provinces seem to have had new areas of fast infection due to “Biddag van het Gewas” on the 11th of March, which caused the drop in numbers to come later.)

Especially when we realize that far from a small part of the current victims in the Netherlands are in nursing institutes (I’m estimating at least half of all daily deaths), we can estimate that the rate of infection outside of these institutions has dropped significantly. This is also because since a couple of weeks there have been no gatherings of big groups of people anymore.

Taking all the above into account tells us how we can taper off the measurements and keep the risk of further spreading at a minimum. And also to succeed as a society revive our economy and social life. Like the lockdown, this can be done in a smart way too.

That’s what I’ll write about tomorrow.

You have just read: This is how the spread of COVID-19 generally takes place.